The Cannabis Cup Delivers Despite Long Lines and Some Rain

You could smell this bag from 20 feet away

Clio, Michigan – The Cannabis Cup returned to Michigan for the first time since legalizing recreational cannabis last fall and it turned out to be a great weekend overall! Politics and ill will seemed to mostly take a break for the weekend as everyone simply enjoyed the large variety of vendors, food and music. There were several innovative cannabis products on display, including prepackaged CBD-only cigarettes and the option to add CBD to your smoothies. Pain management was a strong theme in many booths and most remained crowded throughout the weekend.

Giveaways, games and raffles were everywhere as well, with prizes ranging from a preroll or a lighter to an actual 6 foot tall cannabis plant! Some booths would just throw goodies out into the crowd, with one giving away what must have been at least 50 t-shirts.

As for the cannabis itself? You name it, it was available! One dollar joints, 20 dollar joints, FREE dabs, edibles, drinks, capsules, infused everything, vaping, clones, seeds, etc. This place had it ALL and it was some of the best quality available.

The Cannabis Cup isn’t complete without some live music as well! Aside from one announced performer having a family emergency, the music delivered some great entertainment and the crowd seemed to love it, rain or shine. Busta Rhymes headlined a sold out Saturday, with Too $hort and Lil Skies finishing out Sunday. All in all, a very entertaining weekend for the cannabis world!

Busta Rhymes had the crowd rocking!

Too $hort delivered yet again

Do you have something you think the public needs to know? Contact me at shelbyindynews@gmail.com or @QuirkyFollowsQ on twitter, DM’s open. I protect my sources. All pictures and video are original content from Shelby Ferguson. 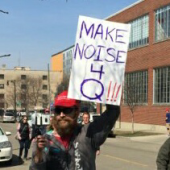